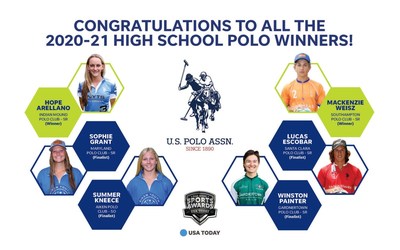 As part of the partnership with U.S. Polo Assn., the ESPY-style award show included for the first time the country’s top female and male athletes in the sport of polo. Unlike many sports, female and male polo players of all ages play on the same fields together, and at all levels, including professional. In addition, many of today’s great polo players began in their youth, like those being recognized here at this special award event.

USA TODAY High School Sports Awards, one of the most extensive high school sports recognition programs in the country, honors talented high school athletes, coaches and teams. This year, 104 regional and statewide programs culminated to set the stage for the first-ever national show, highlighting more than 1,000 honorees in 27 sports categories from 50 states, all vying for the opportunity to be named the top athlete in their sport. The regional honorees and winners were revealed in June, and state winners were announced in July. Winners from the state level, chosen from a base of more than 60,000 student athletes and 24,000 schools, made up the honorees for the national show.

All honorees received a special gift box from USA TODAY with commemorative items, including a keepsake co-branded trucker hat from U.S. Polo Assn., the show program and other sponsor gift items.

«On behalf of U.S. Polo Assn., I’d like to congratulate all of the participating athletes and recognize the outstanding winners,» said J. Michael Prince, President and CEO of USPA Global Licensing, the worldwide licensor of the multi-billion-dollar U.S. Polo Assn. brand. «It’s been an honor for U.S. Polo Assn. to be the presenting sponsor for this star-studded event where we had the tremendous excitement of introducing the sport of polo to this year’s roster of awards. As an authentic, sport-inspired global brand, we love the opportunity to support up-and-coming student polo players as well as the amazing athletes from so many other sports.»

Finalists and winners for the category of polo were selected through a stringent process that was conducted by the USPA and included a committee of internal experts and a diverse group of representatives from within the USPA, Polo Training Foundation and the Interscholastic/Intercollegiate Committee. Ultimately, the winners were selected for being the highest performing and most qualified candidates.

«The USPA is proud to have this opportunity to be included in this prestigious student athlete recognition event and to be able to put forth our best student polo players from around the U.S. on this stage,» said Stewart Armstrong, Chairman of the USPA. «It’s the USPA’s mission to support youth polo players through our interscholastic and intercollegiate programs, and we hope to see these deserving athletes on the professional stage in the coming years. Congratulations to all!»

Among the other 27 sport categories for these elite high school athletes, coaches and teams were baseball, basketball, cross country, football, golf, gymnastics, hockey, lacrosse, soccer, softball, swimming and diving, track and field, tennis, volleyball, wrestling and more. The national broadcast showcased stories and highlights of the nation’s top athletes in each sport and their stellar performances from the past year.

«We were thrilled to partner with a sport-inspired brand like U.S. Polo Assn. and to include polo in our awards this year,» said Crystal Costa, the program’s event director. «Polo is an amazing sport that many people don’t get a chance to see in person. It’s great that we can draw more attention to the sport of polo by including it in an event of this stature for such deserving kids.»

The on-demand awards show can be viewed at Global Polo TV and at USA TODAY, USA TODAY News and USA TODAY Sportswire channels, available on Amazon Fire TV, the Roku Channel, Samsung TV Plus and most Smart TVs. It’s also available on Amazon Prime Video Direct and at SportsAwards.USATODAY.com. Stories about the honorees and more program information can also be found at https://sportsawards.usatoday.com/national/honorees.

U.S. Polo Assn. is the official brand of the United States Polo Association (USPA), the nonprofit governing body for the sport of polo in the United States, and one of the oldest sports governing bodies, having been founded in 1890. With a multi-billion-dollar global footprint and worldwide distribution through some 1,100 U.S. Polo Assn. retail stores, department stores, sporting goods channels, independent retailers and e-commerce, U.S. Polo Assn. offers apparel for men, women and children, as well as accessories, footwear, travel and home goods in 180 countries worldwide. Recently ranked the fifth largest sports licensor in License Global magazine’s 2020 list of «Top 150 Global Licensors,» U.S. Polo Assn. is named alongside such iconic sports brands as the National Football League, National Basketball Association and Major League Baseball. Visit uspoloassnglobal.com.

About the United States Polo Association®

The United States Polo Association was organized and exists for the purposes of promoting the game of polo, coordinating the activities of its Member Clubs and Registered Players, arranging and supervising polo tournaments, competitions and games, and providing rules, handicaps, and conditions for those tournaments, competitions, and games including the safety and welfare of participants and mounts. Founded in 1890, the USPA is the national governing body for the sport of polo. The USPA is currently comprised of almost 300 member clubs with thousands of individual members and oversees 40 national tournaments. For more information, please visit uspolo.org.