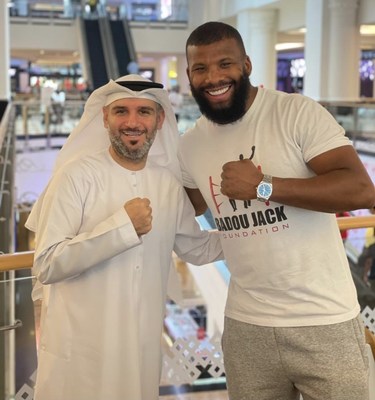 Jack, who has faced 8 world champions back to back in the ring is known in the boxing world as an absolute blood and guts warrior, taking on all and any challenges.  He has been on the receiving end of some of boxings most controversial decisions such as his latest world title fight against Jean Pascal, which had over 75% of the viewing audience with Jack as the winner. The rematch was scheduled on the undercard of Floyd Mayweather vs Logan Paul, but due to 4 failed VADA tests by Pascal for Illegal Substances, the fight was called off.

Badou would rather be known and remembered for his work outside of the ring as he promotes his Badou Jack Foundation, whose slogan is «Giving Children Across the Globe a Fighting Chance in Life».  The foundation has helped thousands of orphans, refugees and children in need across the globe. Recently, his ventures are focused on abused children domestically in the United States and launching the «Fighting Abuse» initiative this year.

Jack plans on returning to the ring later this year in a mega fight and finalizing plans on the bout to be based in the Middle East, particularly the United Arab Emirates, under his promotional banner, Badou Jack Promotions.

«Badou has made Dubai and the UAE his second home, and loves spending time there,» Manager Amer Abdallah stated.  «We are hopeful to secure a fight in the region very soon.»

«I want to thank my friends at ITP Media, the Dubai Film and TV Commission and the entire UAE Government for this honor,» said Badou Jack, who is currently in Dubai. «I love the UAE and all of the people here.»