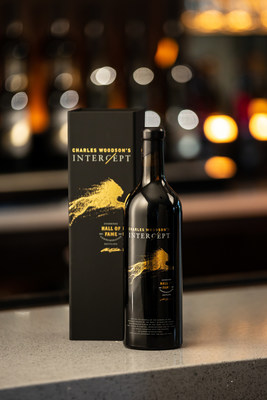 Woodson launched the Intercept Wines brand in 2019. Based on his storied career, the Intercept Wines team prepared to have the 2018 vintage ready for 2021 should he become a first-ballot Hall of Famer. In February 2021, that aspiration became reality.

«When we found out Charles was eligible to be selected to the Pro Football Hall of Fame, we were eager to make a commemorative wine to celebrate the occasion,» said Intercept winemaker Amanda Gorter. «We wanted to create something special that truly embodied the sentiment of greatness from grape to glass.»

The 2018 Limited Edition Hall of Fame Cabernet Sauvignon (SRP $150) – Woodson’s favorite varietal – is sourced from four premier districts in California’s Paso Robles AVA: Adelaida, Estrella, El Pomar, and Willow Creek. This Cabernet Sauvignon is a full-bodied wine with bold tannins and exquisite structure, making this a wine that can be enjoyed today, or laid down to be aged and opened years from now.

Tasting notes of blackberry and mulberry are reminiscent of Woodson’s early years growing up in Fremont, Ohio, where he’d often be found climbing mulberry trees. This sensory experience truly completes the full circle of Woodson’s career that began in Ohio when he picked up his first pair of cleats and culminated when he was enshrined as a Hall of Famer in Canton, Ohio.

The 2018 vintage grapes were selected not only for their outstanding quality and readiness, but also to symbolize Woodson’s remarkable 18-year professional football career. Additionally, the limited production resulted in 6,500 bottles, an homage to his 65 career interceptions. His stellar career accolades are etched onto the bottle, and a note from Woodson lines the inside of the soft-touch matte black gift box.

Woodson explained, «Intercept has created this Hall of Fame Edition Cabernet Sauvignon – very fitting for this special time in my life! I’m sharing this moment with you because when I go in, we all go in!»

This one-time, commemorative Cabernet Sauvignon is now available for purchase online only at cwinterceptwines.com.

About Charles Woodson
Charles Woodson is an 18-year NFL veteran, former NFL Defensive MVP and Heisman Trophy winner. He is a Super Bowl champion and nine-time Pro Bowl defensive back. To date, he is the only primarily defensive player to win the Heisman. Woodson went on to accomplish a storied career professionally with one of the most decorated professional football resumes of all time, considered by many of his peers to be one of the greatest defensive players to have ever played. In 2021, he was a first-ballot enshrinee into the Pro Football Hall of Fame. A longtime Vintner, Woodson launched Charles Woodson’s Intercept Wines in 2019 to bring his passion for wine to all sports fans.

BayCare to Train Next Generation of Pediatricians at St. Joseph’s Children’s Hospital in Tampa