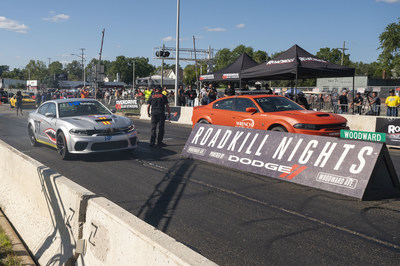 Back after a one-year hiatus, MotorTrend Presents Roadkill Nights Powered by Dodge staged a thrilling return to Woodward Avenue on Saturday, August 14, drawing 38,000 performance enthusiasts to M1 Concourse in Pontiac, Michigan, for the popular festival of street-legal drag racing.

«Roadkill Nights is all about stoking the passion of the Dodge Brotherhood of Muscle, and this year the energy and excitement of our fans was off the charts — people were so pumped up to be back on Woodard Avenue celebrating the return of live, street-legal drag racing,» said Tim Kuniskis, Dodge Brand Chief Executive Officer – Stellantis. «In its sixth year, Roadkill Nights remains the ultimate celebration of performance-car culture and the perfect grassroots event to showcase what Dodge represents — a pure performance brand.

«We set out to settle once and for all the great debate; who’s faster: TV or online car builders. In the end, the debate will rage on until next year.»

Historic Woodward Avenue was transformed into a 1/8-mile straight-line playground for 110 street-legal drag racers, while spectators also had the chance to get their adrenaline pumping with thrill and drift rides in Dodge Challenger and Dodge Charger SRT Hellcat vehicles on the M1 Concourse. New-for-2021, the Hellcat Grudge Race pitted Eric Malone of MotorTrend’s television series «Fastest Cars in the Dirty South» and four online automotive builders in heads-up racing. Malone and each of the online builders — Alex Taylor, Tavarish, Westen Champlin and Throtl — received a Challenger or Charger SRT Hellcat Redeye and $10,000 in cash for car modifications.

Taylor emerged victorious in the battle between the four online builders, earning a spot in the final round faceoff against Malone thanks to a .002-second reaction time that helped her knock out Westen Champlin and his twin-turbo modified Dodge Charger SRT Hellcat Redeye. Taylor was victorious in her modified, racing slicks-equipped Dodge Challenger SRT Hellcat Redeye ride after Malone left the line too early in his Charger SRT Hellcat Redeye. In a «just for fun» exhibition run after the final, Malone left first and beat Taylor to the finish line, leaving room open for further discussion in the TV-versus-online builder debate.

«I’m so glad to have had the opportunity to go head to head in this build-off and Hellcat Grudge Race against four worthy opponents: Alex, Tavarish, Westen, and Throtl,» said Malone. «No matter the outcome, the race has proven that TV and online builders and racers each bring something special to the table, and we all brought our A-games to Roadkill Nights. I look forward to seeing what these four builders do in the future, and hope to have the opportunity to race against them again soon.»

Jimmer Kline, of Wyoming, Michigan, repeated as champion in the Big Tire class. Kline raced his 1966 Acadian Chevy to victory in the final against Litchfield, Ohio’s Jeremy Bonnett and his 1928 Pontiac Sedan. The event wrapped up with one of the best races of the day, as Nicholas Taylor drove his 2000 Ford Mustang to a razor-thin win in the Small Tire final over Shawn Fensler’s 1993 Ford Mustang in a battle of Fort Wayne, Indiana, natives.

Unique event fan packages and experiences were also auctioned off, raising thousands of dollars for the United Way for Southeastern Michigan.

Street racing can have serious legal and safety risks. Both ROADKILL and Dodge want enthusiasts to enjoy performance driving in a safe, controlled environment, run by professionals with vehicle safety inspections, driver evaluations and track safety.

MotorTrend Group
MotorTrend Group is the largest automotive media company in the world, bringing together Discovery’s MotorTrend TV and a vast automotive digital, direct-to-consumer, social, and live event portfolio, including MOTORTREND, HOT ROD, ROADKILL, AUTOMOBILE, and more than 20 other industry-leading brands. With a monthly audience of 26 million across web, TV, and print, and 110 million social followers, culminating in 1.3 billion monthly impressions across all platforms, the company encompasses television’s #1 network for automotive superfans, a leading automotive YouTube Channel, and the MotorTrend App, the only auto-dedicated subscription video-on-demand service. MotorTrend serves to embrace, entertain, and empower the motoring world.

Dodge//SRT
For more than 100 years, the Dodge brand has carried on the spirit of brothers John and Horace Dodge. Their influence continues today as Dodge shifts into high gear with muscle cars and SUVs that deliver unrivaled performance in each of the segments where they compete.