TORONTO, Sept. 9, 2021 /CNW/ – Development continues on the Maple Majestic Canadian EV by Toronto-based AK Motor, with significant milestones reached in bringing together the right partners for the project.  Maple Majestic is intended to be Canada’s flagship brand of automobiles for the world market.  In building this vehicle, AK Motor is trailblazing an innovative new business model that is ideally tailored to Canada. The Maple Majestic vehicle is being developed using external suppliers for components and assembly services, as well as technological innovations and academia.  The Maple Majestic EV project is divided into module packages which represent complete projects for leading suppliers with expertise in these areas. AK Motor is providing an opportunity for these companies to effectively take ownership of these modules, and to unleash the full power of their creative potential.  In using this strategy, AK Motor is reaching out to parts suppliers for opportunities in co-operation. 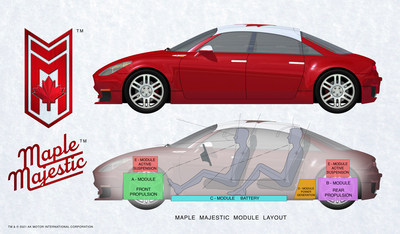 «In formulating a business strategy for the Maple Majestic venture, we wanted to do things in a way that is reflective of Canada’s auto industry.  Our ideas are disruptive, but we’re not here to displace existing stakeholders.  Instead, we are here to empower them.  The strategy has to be the right fit for the country.  Canada may not be well known for creating its own automotive brands, but our country pioneered the business of producing parts for automotive OEMs.  With over 600 domestic parts suppliers, Canada is a world leader in technological development and providing services to OEMs.  If we’re to build a Canadian car, leveraging these resources is the right fit for the future of Canada’s auto industry.  It is the best business model because it also focuses on the success of existing stakeholders, and not only ours.» – According to AK Motor founder and CEO Arkadiusz Kaminski

The global shift towards Electric Vehicles represents an opportunity for Canada to become more than a parts supplier for the world’s OEMs.  It is an opportunity for Canada to shape its own destiny, and lead with its own automotive brands.  Recent years have shown that the world is very receptive to new players entering the automotive arena, and this is a chance for Canada that will not repeat itself any time soon.  At the core of this opportunity lies the need to recognize that Canada cannot do things the way it used to.  Building parts and developing technologies has been the traditional approach for Canadian companies for many years, but the real opportunity is to create a Canadian automotive brand that leverages these resources.

«We’ve all heard the old adage that doing things the same way over and over, but expecting a different result is the definition of insanity.  We all know that change is necessary, but it’s not sufficient to just do things differently.  It’s a question of doing things better, and smarter.  Placing a greater focus on building complete Canadian-branded automobiles actually translates to more opportunities for parts suppliers.  When these companies diversify their engagement among multiple Canadian EV projects, they are consolidating the potential for modularity and interchangeability of their components while daftly hedging their bets on success.  Our outreach is especially directed towards members of the APMA (Automotive Parts Manufacturers Association), an organization which has already been instrumental in introducing us to the right partners.  We are casting a broad net in forming an alliance of the willing among companies that want to participate in the Maple Majestic project.  Even companies that are not quite certain about how they would fit in, are invited to reach out, say hello, and let’s get the dialogue going.» – further underscores Arkadiusz Kaminski

AK Motor’s logic of working with parts suppliers extends to organizations of different structures, like assembly services, developers of new technologies and academia.  The objective is to create an ecosystem for the development and manufacture of Canadian automobiles.  Figuring out the best way to integrate these diverse automotive building blocks now will go a long way towards securing Canada’s future as an automotive manufacturing country, creating unprecedented opportunities for future generations of Canadians.  A great example of this co-operation is AK Motor’s recent usage of the VR Cave which is operated by Invest WindsorEssex.  The VR CAVE is Canada’s largest publicly accessible facility that was created through the support of the Province of Ontario’s Autonomous Vehicle Innovation Network and Windsor–Essex being designated as a Regional Technology Development Site.  Working with the Simulation Team at the Invest WindsorEssex VR CAVE allows for the immersive visualization of the Maple Majestic virtual prototype to showcase how the vehicle will transform through its pre-production journey.

«The Windsor–Essex region is the birthplace of the Canadian Automotive industry.  We are very proud to work with AK Motor to support their efforts in the creation of the Maple Majestic concept vehicle.  By providing simulation capabilities through the Invest WindsorEssex VR CAVE to help bring the model to life, we hope that this will offer a glimpse into the exciting journey ahead for AK Motor and the great things to come for Canada’s Automobility future.» – Ed Dawson, Senior Manager of Automobility and Innovation – Simulation Team at Invest WindsorEssex

«Canada’s automotive industry is at a cross-roads and there is a lot at stake at this very moment.  There has been a tremendous amount of investment into Canadian technologies in recent years, but if we don’t produce our own Canadian automobiles to harness these technologies, this situation can easily turn into the greatest brain drain Canada has ever seen.  Technologies are most commonly developed in close proximity to where they will be produced, and if there are no local Canadian OEMs to implement the technologies, it stands to reason that their production may be relocated to other world regions.  A project like Maple Majestic has the capacity to anchor the production of technologies that were developed in Canada, right here in Canada, giving them the sort of long-term stability and profitability that only a world-class Canadian brand of automobiles can.» – Arkadiusz Kaminski

The Maple Majestic project display can be seen at the Drive Festival at Canadian Tire Motorsport Park on September 10-12, 2021. 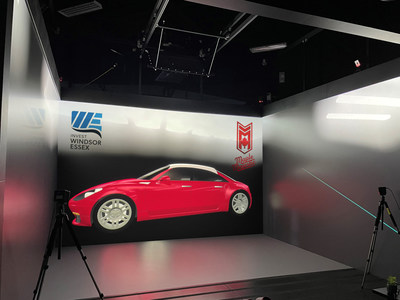 KDC of Hanryu Bank, additional listing on the global crypto exchange XT for Korean wave fans around the world