SEATTLE, July 29, 2021 /PRNewswire/ — For the first time since the award was presented in 1992, an Asian woman is being considered for GRAMMY Award categories of Best Traditional Pop Vocal Album of the Year and also Best Pop Duo/Group Performance of the Year. K-pop group BTS was nominated for Best Pop Duo last year. 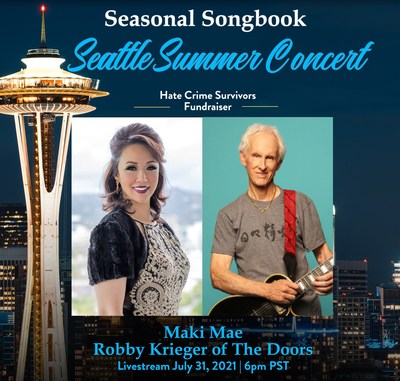 In her debut album Seasonal Songbook, 13-language vocalist Maki Mae collaborated with Rock and Roll Hall of Fame guitarist Robby Krieger of The Doors in a samba-reggae groove of «My Favorite Things». Brazilian pianist Ed Roth integrated Bossa Nova arrangements and is considered for Producer of the Year. Ringo Starr’s engineer Bruce Sugar is up for Best Engineered Album of the Year.

Seattle Seahawks, Port of Seattle, Northern Trust and Robert Chinn Foundation including Chairman of the Board Karen Wong will make special appearances to celebrate the music milestone at a Seattle Concert. The free live stream is Saturday, July 31 at 6:00 p.m. PT on the Asian Hall of Fame website.

«It’s a good cause and we’re going to have a lot of great musicians playing, so check us out,» Krieger said of the concert.

Chinese, Japanese, and Korean American Maki Mae has performed at arenas, festivals and for dignitaries including Queen Paola. Mae is the stage name for Maki Hsieh, President & CEO of Asian Hall of Fame, and a Voting Member of The Recording Academy whose membership is 2% Asian.

«My hope is to accelerate opportunities for Asian talent in America by advancing timeless content, iconic collaborations, and world-class artistry,» Hsieh said of the album.

The Asian Hall of Fame is a premiere global recognition program that has inducted Bruce Lee, Kristi Yamaguchi and other honorees. Global Council Chairman Noel Lee partners with Amazon, Boeing, Seahawks, Disney, YouTube, IBM and other distinguished leaders across the country.

Artists and executives are available for interviews.

Movember 30 Will Be A Mammoth Day Of Giving